Villa Finale invites its volunteer staff to write articles about their interests and travels in our The Bee Line volunteer e-newsletter.  For your enjoyment, we would like to share this and future writings by our volunteer staff.  The following article is by Rebekah Bustamante, one of our Guides and member of Villa Finale’s Volunteer Council.  Thank you for sharing your travels, Rebekah!

It is interesting that as I sat here thinking of our visit to Comfort, Texas last week, and considering writing an article on it, I noticed an article in My SA Home Page June 12,2013. If you have not read it, you will find it an interesting read. What impressed me is the connections between Comfort and San Antonio. San Antonio and the King William area share results of efforts by architect Alfred Giles, Ernst Hermann Altgelt and Albert Steves with the town of Comfort, Texas.

Comfort is a forty-seven mile drive or forty-six minutes from downtown San Antonio. It was established Sept 3, 1854 by freethinking German immigrants. Some migrated from the collapsed Fisher-Miller Land Grant experimental colonies of the Darmstadt Society of Forty that had originally planned to establish socialistic communes in Wisconsin. Some were encouraged to come when the Adelsverein was organized. Still others followed Prince Solms from the Johann Dethard proceeding to New Braunfels. After a short time in New Braunfels, Fritz and Betty Holekamp began construction on their home, the first home in Comfort before the city was officially founded. Along with Ernst Altgelt age 22, Fritz Holekamp helped survey, lay out and found Comfort. Betty Holekamp is recognized for several “firsts.” She was the first-known white woman to cross the Guadalupe River on horseback. She was the first to sew an American flag when Texas was accepted into the Union, and she was the first to give birth to a white child in Kendall County. 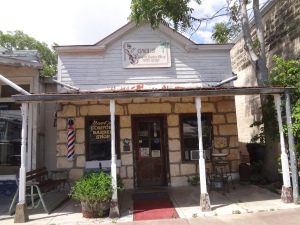 Ernst Algelt began lumber and grist mills without success. In 1855, he married Emma Murck and took up the practice of law. In 1866 he moved to San Antonio surveyed and platted King William, built the first house on King William St. and had the privilege of naming the Street after Wilhelm I of Prussia. His second home, which was more elaborate was built at 226 King William. He had nine children and died at his family ranch in Wassenburg, Texas. Architect Alfred Giles, who lived and designed homes in San Antonio would ride horses, stagecoach or train to check his building sites in Comfort. Seven of the over 100 structures dating back to the 1800s were designed by him.

The Steves family farmed on the Guadalupe River near New Braunfels and then began a farm and stock ranch on Cypress Creek between Comfort and Kerrville. Albert Steves erected a bat roost on his family farm to attract bats and control mosquito populations by natural means. At one time there were sixteen in the US and Europe. The one in comfort and another in the Florida Keys are the only two remaining. There are three homes on King William that were built by the Steves when the Indian raids made it difficult to live near Comfort. Their lumber company has changed locations many times since it was first located behind the Menger Hotel, off Alamo Plaza, where the Joske’s Store now stands, to Walnut and then Buena Vista & South Medina. The Steves Family Lumber has grown to locations nationwide and is still making doors.

When you visit Comfort you learn more about San Antonio. Should you wander that direction, on your way be sure to check out the Old Tunnel State Park where a colony of 1-3 million Mexican free-tailed bats reside seasonally May – Oct. This tunnel originally was a passage through the hills for the Southern Pacific RR. Be sure to see the Steves hygieostati bat roost and the Treuer der Union monument. This is the only monument in the state south of the Mason-Dixon Line to honor German settlers massacred by Confederates on the banks of the Nueces River as they tried to reach Union Troops via Mexico. There are more classic German stone home buildings in Comfort than almost anywhere else in Texas. Most of them are now housing antiques, restaurants or bed & breakfasts. You might find collectible objects that you enjoy in Villa Finale.

Author Elizabeth Berg wrote, “There is incredible value in being of service to others.”  Here at Villa Finale, we highly value the service of our dedicated volunteer staff.  Our volunteer program began back in mid 2008 with only three on the roster and since then we have had a number of wonderful folks join our ranks.  From staffing events, guiding tours, providing security for our collections, polishing silver, conducting research and even modeling for program photos, our volunteers can do it all!

I began in the museum field as a volunteer and I understand how valuable one’s free time is which is why I, and the rest of our paid staff, are so grateful to those folks who show up to help week in and week out.  This being Volunteer Appreciation Week, we would like to say to all of Villa Finale’s volunteers, THANK YOU … we appreciate you!

Times they are a changin’ at Villa Finale

This October, 2013 will mark the third anniversary of Villa Finale opening its doors to the public.  As a new site, we are still looking at better ways we can serve the general public and the community.  We began opening the grounds at the beginning of the year and this has turned out to be very well-received as the site is now more inviting.  Also, during the last couple of years, we discovered that many people wanted to see Villa Finale but had either very little time or were confused about the location of the Visitor Center to buy admissions (the Visitor Center is located four blocks from Villa Finale).  In order to be accessible to more people, we are proud to announce the following changes to Villa Finale’s operations effective April 2, 2013.

Admission prices
Guided tour admissions will remain the same: $10.00 general, $7.50 for seniors, students and military.  Self-guided tours (first floor only) will be $7.50 general admission and $5.00 for seniors, students and military.  There will also be an option to upgrade from a self-guided tour to a full guided tour of the entire house.  Members of Villa Finale and / or the National Trust will continue to receive free tour admission. 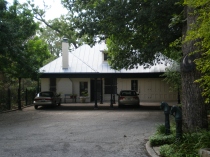 Business Hours
The following are the business hours for all areas of Villa Finale: grounds, Carriage House (admissions and Museum Shop) and the Visitor Center at 122 Madison.

Please note: all areas of Villa Finale are subject to closures for maintenance or special events on select dates and major holidays.

Parking for Villa Finale
Guests are welcome to park along King William Street or Sheridan Avenue.  The site can be accessed during regular business hours from the front gate on King William or the driveway gate off of Sheridan.

And of course, we are always looking for volunteers, especially with the addition of self-guided tours.  There is minimal training involved (click here for volunteering information).

This is an exciting time of positive change at Villa Finale!  Make sure you stop by and visit if you haven’t already.  And for those of you who work downtown don’t forget, we welcome you to enjoy your brown bag lunch on the grounds of Villa Finale.

Thank you, San Antonio for your continued support!

Now that we have completed our first year of public tours, Villa Finale Guide, Becky McColley and her husband, Joe were gracious enough to host a potluck at their residence this past weekend to mark the occasion.

While Becky and Joe provided the main entrée, members of our staff brought along a variety of tasty dishes such as arroz con pollo (chicken and rice), deviled eggs, au gratin potatoes, and several delicious desserts.  Best of all, however, was the company that evening – we certainly couldn’t ask to work with a better group of people.  Villa Finale’s National Trust staff recognizes the invaluable contributions our volunteer corps makes each and every single day.  While it may sound cliché, we certainly couldn’t do everything we do without our wonderful Volunteer Staff.

Thank you again, Villa Finale staff — here’s to a long future to come!