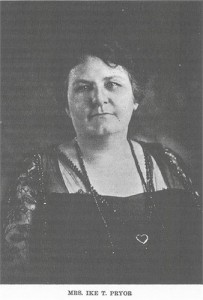 Among the many people who owned 401 King William aka Villa Finale were Colonel Ike Pryor and his wife, Myra. The couple purchased the home in 1896 from E. B. Chandler and Thomas H. Franklin who bought the property after it went up for auction in December 1895 following the foreclosure on Edwin Polk. What was interesting about the transaction from Chandler and Franklin to the Polks is that the deed states Myra paid $2,500 in cash upfront “out of her separate money given her by her mother.” This bit always intrigued me and it didn’t make complete sense until I looked further into the life of Ike Pryor.

At the time they purchased the home, Colonel Ike’s career as a cattle merchant was in transition. He and his brother were left penniless after the severe winter of 1886 – 1887 decimated their herd. After losing his livestock, he borrowed $70,000 on his good name to invest in the Texas and Colorado Land and Cattle Company and settled in San Antonio. While he continued to be a respected businessman, there was very little wriggle room financially as far as it came to major purchases, and this is why it makes sense having Myra’s name as the source for the home’s downpayment as clearly stated on the deed. My fascination with Myra Pryor didn’t end with the purchase of the property.

One day while taking a jog along the River Walk, I noticed her name on a plaque by the AT&T Lock and Dam, under Brooklyn Avenue: this is when I knew there was more to her story. Ike Pryor married Myra in 1893 after his first wife, Sarah, passed away. Myra was born in Columbus, Texas to a well-to-do family. Myra had married once before but was left widowed after the passing of her first husband, George Early, in 1888. She lived with her second husband, Ike, in King William (at what is now Villa Finale) until 1901 when they purchased 100,000 acres in Zavala County, a property they called “77 Ranch.” After the lifting of the blockade of Cuba following the Spanish-American War, Ike made a fortune by shipping cattle on speculation to Havana for “spot sale” (cash for goods delivered on the spot). In 1908, they founded the town of La Pryor, roughly 20 miles south of Uvalde. Ike died in 1937 leaving his fortune primarily to Myra. Myra died in 1943 leaving Frost National Bank as the trustee of her estate valued at $750,000 (over $10 million today) for the purposes of “a trust created for charitable purposes in perpetuity.” It was Myra’s last will that all net income remaining with the Trustee should be used solely for charitable purposes at the Trustee’s discretion.

This last provision and others in Myra’s will and testament were challenged by some of her family members in court. While they won a case in District Court that invalidated the creation of a trust, the Court of Civil Appeals in San Antonio in 1945 reversed that decision upholding her last wish to create the Myra Stafford Pryor Charitable Trust. Today, this Trust has over $25 million in assets and annually gives over $1 million to charities and non-profit organizations. Among the many wonderful initiatives funded by Myra’s generosity are full time tutors and mentors for San Antonio’s underpriviledged youths, funding for trainers for Guide Dogs of Texas, and new state-of-the-art technology for the Mays Business School at Texas A&M. Her legacy in San Antonio lives on!