Villa Finale’s staff truly enjoyed the trip to Rockport earlier this month.  The weather was perfect and the staff at the Fulton Mansion was informative and eager to answer our questions — a big thanks to them for their hospitality!  We also had the opportunity to see many other beautiful sites in the surrounding area such as Goose Island State Park and the Aransas National Wildlife Refuge Complex.  We also had great seats for the Fulton Oysterfest parade which made its way right in front of the Fulton Mansion just after our tour.  Here are some highlights of that enjoyable weekend.

What a difference two days makes

Work at the Visitor Center is progressing more each day. With some significant changes since our last update, we thought we’d let you see it all for yourself — and it’s only been two days!

It IS Exciting to Watch Paint Dry!

With a fresh coat of paint and a newly completed trellis, here is the latest update on Villa Finale’s Visitor Center.

Here is our latest video on the progress of our Visitor Center. We wanted to give you all a better idea of where exactly it is located and how much things inside have changed since our last update. Enjoy!

Visitor Center: A Work in Progress

Meg and I have been hard at work designing exhibits for the visitor center.  We have two exhibits in the works: one permanent based on Villa Finale’s four main themes, and a temporary exhibit which will serve as a preview for the collections found within the main house.  To give you a better idea what to expect inside the visitor center, we have created this short (and very rough) video for your viewing “pleasure.”  Enjoy!

Notes from the House

The Villa Finale visitor’s center on Madison Street, just a few blocks away from the museum, will be, among other things, an exhibition gallery where we’ll be able to explore themes not addressed in the house, and  display things that we’d like to highlight from the collection and objects that, because of space restrictions, just can’t be exhibited anywhere else.

The staff at Villa Finale began, quite a while ago,  creating a list of possible exhibitions and thinking about which objects would adequately represent Villa Finale in a venue that wasn’t Villa Finale.  The first exhibition installed will be our permanent exhibition about Mr. Mathis, his role in preservation, Villa Finale and King William.  Since the visitor’s center will be open well before the museum, the second, changing exhibition, will act as a preview for the museum.  Our plan is to exhibit photos of the museum rooms, as the public will see them upon opening, and exhibit key objects from each room.

Therein lies the problem.  Which objects?  The task has been given to me to figure this out.  At least initially.  I have chosen six or seven objects per room, adding up to a grand total of about 115 objects.  The idea was to choose two per room, but I can’t help it.   It is more complicated than just taking the prettiest, or most valuable.  Shouldn’t they reflect the room they are in?  Shouldn’t they speak of Mr. Mathis?  Shouldn’t they tell the stor

house that was lived in?

Together as a staff, we will review  the choices I’ve made.  I’m not sure we’ll all agree on the jar of Mr. Mathis’s pasta I’ve picked for the kitchen.  But,  juxtaposed with an elegant black jasperware Wedgwood ewer, it really says “Mr. Mathis” and “Villa Finale” at the same time!

And now for other news from the Curtatorial Department:

Next week, a loan will be returned to us from President Lincoln’s Cottage in Washington, DC.   Last June, I sent two Lincoln  items to our fellow National Trust Historic Site to be included in their exhibition “A Deep and Subtle

Expression”.  The exhibition examined artists’ attempts to capture the soul of Lincoln through sculpture.  The museum asked for a glass bust of Lincoln made by Gillinder and Sons Glass Company for the 1876 Centennial Exhibition in Philadelphia and an opalescent paperweight depicting Lincoln, based on his Mount Rushmore portrait.  You can find out more about the cottage at www.lincolncottage.org  The loan was our first, and we hope there are many more.  We will undoubtedly ask for those of other museums for our exhibitions.

There are thousands of interesting objects within Villa Finale’s collection and not all can be individually exhibited, so the staff decided it would be a good idea to put a large number of them on the museum’s website.  I think about 2000 will make the initial cut, and maybe one day, all of them will be on-line.  It will not only be interesting for the general public, but a great resource for scholars and researchers.  Right now, I am reviewing the descriptions of many of the objects I think should be included and will most likely, with my trusty volunteer Merribell Parsons, make the descriptions a bit more informative and beefy.  Keep an eye out for their debut!

Exciting times are here for the staff at Villa Finale, we have visions of nail guns dancing in our heads … I hope that we do not hear a clatter on the rooftop because that work is not scheduled to start yet.  We are seeing more and more progress every day on the visitor center.  The project is now starting to transition from the “Selective” Demolition phase, to the Construction phase.  The skeletal iron work  and the forms for the new concrete that is being poured for the “New” Entrance and filling in of the old loading dock. 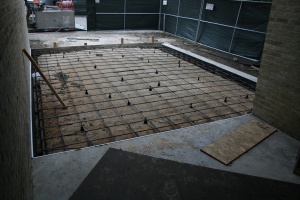 Interior walls are starting to get framed.

The contractors have also started to cut the concrete slab floors for the new plumbing that will be going in. 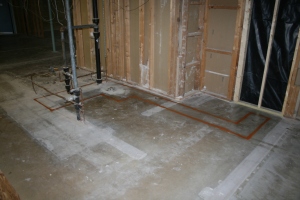 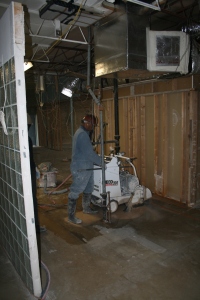 Stay tuned for more stories of construction in the New Year.  Until then, Happy Holidays to all and to all a good night!!!

On Monday, December 1, 2008 the construction fence went up around the building that will become our new administrative offices and visitor orientation space.  This kicks off a roughly 20 week project that will culminate with the creation of a space for our staff and guests to interact and learn about Villa Finale and Mr. Mathis. 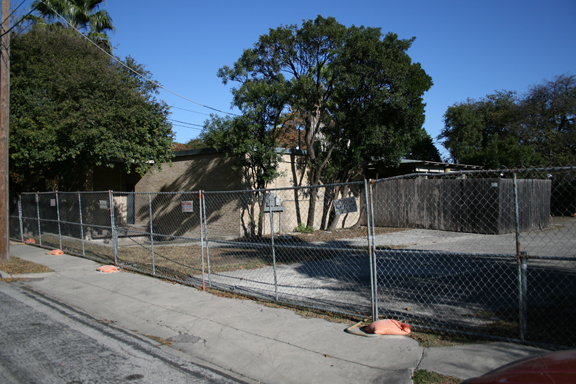 Another view of the Visitor Center, pre-demolition.

It has been a busy time for us at Villa Finale.  While my colleagues have been busy with contractors, architects, and packing the many collections in the house, I have been busy with, among others things, oral histories.  I conducted the first full-length interview for Restoring Voices two weeks ago and I was even ambitious enough to transcribe it myself … it’s a big task, but a great experience.  In addition to our oral history program, I continue working on research for tour development, programming ideas, designing rack cards, and more.

Also, in keeping true to our team-management philosophy, I have been meeting with my colleagues as we explore such possibilities as site photography, preview tours, and exhibits for the Visitor Center.  While the amount of work that needs to be done before our opening can at times feel overwhelming, we have been successful in keeping things light-hearted thanks to our great working relationships, something very valuable for small staffs!  Make sure you keep coming back for further updates.

Villa Finale’s Visitor Center is among the many items we have to tackle.  Located roughly three blocks from Villa Finale, the Visitor Center will not only be the place to introduce Walter Mathis and his work, it will also be the perfect place to create rotating exhibits of interest for tourists and the residents of King William.  In fact, we would like the Visitor Center to be a place that residents can be proud of and feel a part of.

While the planning of exhibits for the Visitor Center are in preliminary stages, there are many exciting ideas on the table.  The Center will also be the perfect place for volunteer training and programs for school-aged children.  Since the Visitor Center is scheduled to open before the house, we will make sure to keep you informed of any progress made on this great part of our development.