Besides the staff, there is wildlife at Villa Finale other than the usual city-dwelling squirrels.  For several months,  mostly in the afternoon, the staff would hear the very distinctive hooting of a large owl, and then the Watership Down-esque shadow of a giant predatory bird flying overhead, causing the most incredible outburst from other smaller and less fortunate birds.

The owl remained out of sight, and only if you arrived very early could you see it crammed up against a tree trunk.  This author was never so “lucky” to arrive at the crack of dawn.  However, one late afternoon when the staff decided to take a spontaneous inventory of the patio furniture, with liquid libation, we saw it very high in a tree over Sheridan Street.

It remained elusive until yesterday afternoon when it was having a battle with another raptor  and I was able to capture an image of it on my camera.  I identified it as being a Barred Owl.  Described as a “sit and wait” type owl, I couldn’t help but feel a kinship with this beautiful and intelligent bird.  It is also described as having “liquid brown eyes”, which also endeared it to me.  But, anthropomorphising aside, this owl is pretty fantastic. 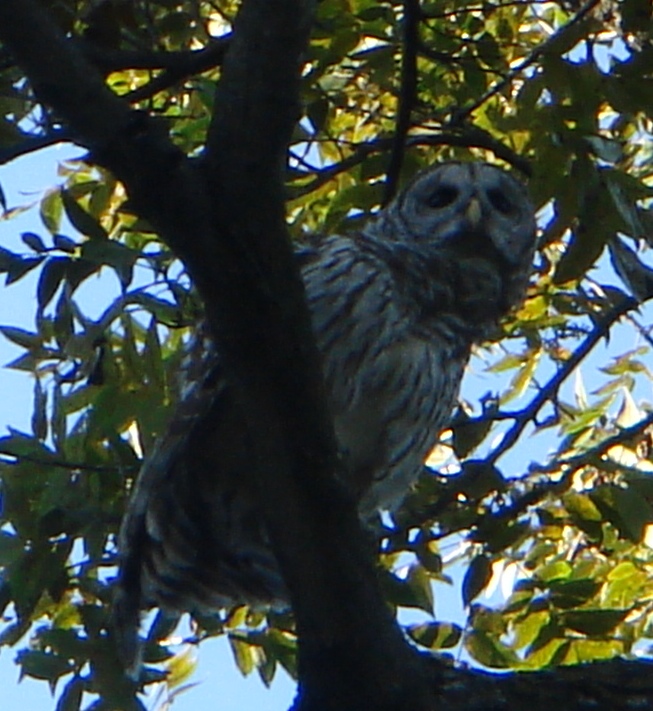 As I mentioned, its hunting method is to literally sit and wait for unsuspecting creatures to pass beneath it.  It will even wade into shallow water to catch crustaceans.  In fact, the belly feathers of the Barred Owl can turn pink from eating crayfish.  The Cornell Lab of Ornithology website provides a map showing the winter range of these owls, and it doesn’t quite make it to San Antonio, so I think it is safe to say that we have a (sort of) rare bird!  These owls are known to live in forested areas near streams or rivers-how perfect that this bird feels as if King William is the place to be.  If we’re lucky, our owl is a female.  Female Barred Owls go outward to find a mate and bring the winning candidate back to her territory to nest.  We may know in February, when the owl population settles down to start their families.

Barred owls are not welcome everywhere, though.  In the last century they have expanded their territory westward, often displacing rarer owls such as the Spotted Owl-however, the Spotted Owl doesn’t seem to mind that much – there have been reports of owl hanky-panky resulting in Barred/Spotted hybrids.

I immediately thought the other raptor was a Cooper’s Hawk, but when looking at the photo I took, his chest is streaked, not barred, its overall appearance did not really look like one.  Maybe a juvenile.  Whatever he is, he definitely seems to mind the owl’s invasion.

If you look very closely, you will see the hawk on the far left and the bulky owl down on the right.  But he shouldn’t really get his feathers ruffled.  Unlike the Cooper’s Hawk, Barred Owls do not catch anything on the wing, so all the sweet little song birds that the Cooper’s Hawk likes to eat will go unnoticed by our owl.